Jinja is the third largest city in Uganda, known for its beautiful views overlooking the point where the Nile flows out of Lake Victoria above the Ripon Falls, which was identified by Speke 1862.  Jinja is a lush location on the northern shore of Lake Victoria, with a population of around 73,000 people. With over 1 million tourist visiting Uganda you will see many tourists passing through the streets of Jinja.

Due to the construction of the Owen Falls Dam in 1950s’ Jinja produces great amount of power which attracts many businesses. The largest business in Jinja is Kakira Sugar, a sugar factory that employees over 7,500 people to extract sparkling crystals, sugar from cane grown on lush plantations. 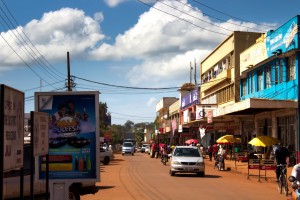 Once the building of the rail from Kenya to Kampala was build, this was a fantastic lead that increased the Indian population in Uganda to set up their businesses.  Sadly Jinja suffered badly during the Amin years in its economic period.  In 1972 approximately 60,000 Indians had to leave Uganda, after given 90 days to leave the country.  After Amins death, the Indians slowly returned and migrated back to establish their businesses of Jinja.

Jinja is known for it’s stunning views of the Source of the Nile and its adrenaline activities such as white water rafting with grade 5 rapids.  Compared to Kampala Jinja is a quiet town that hosts many beautiful restaurants and craft shops.